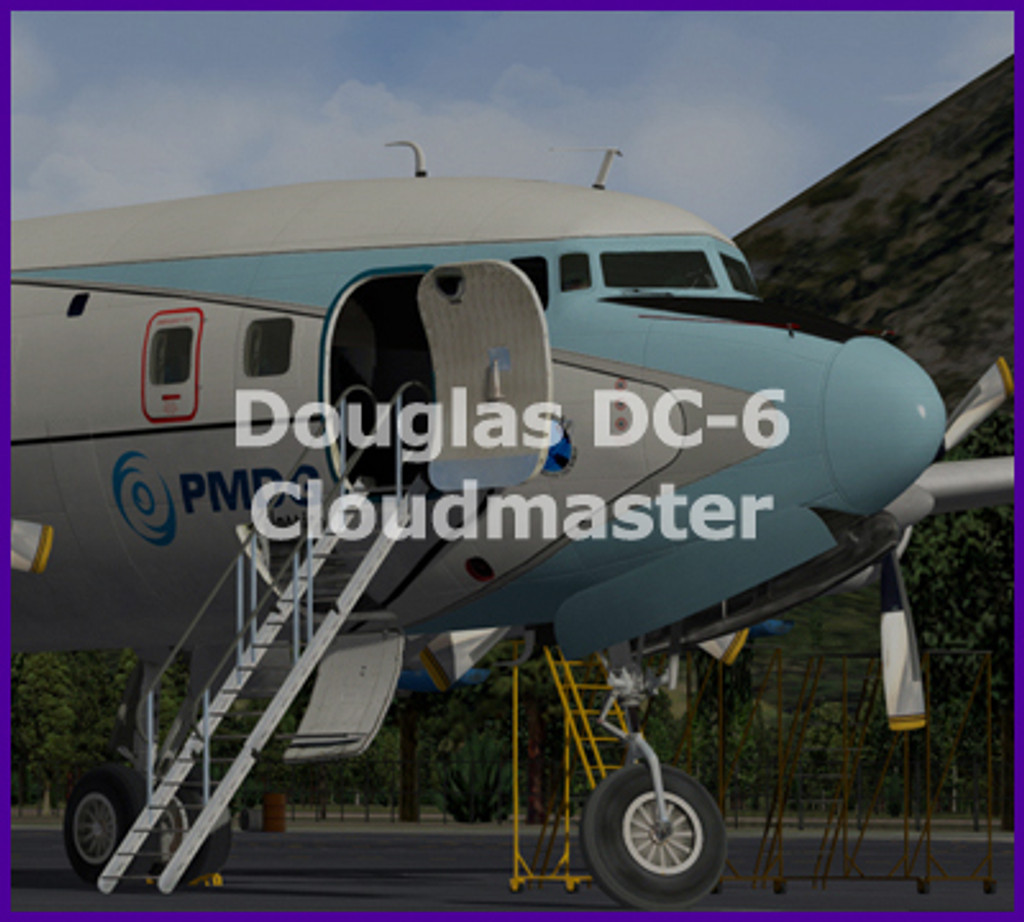 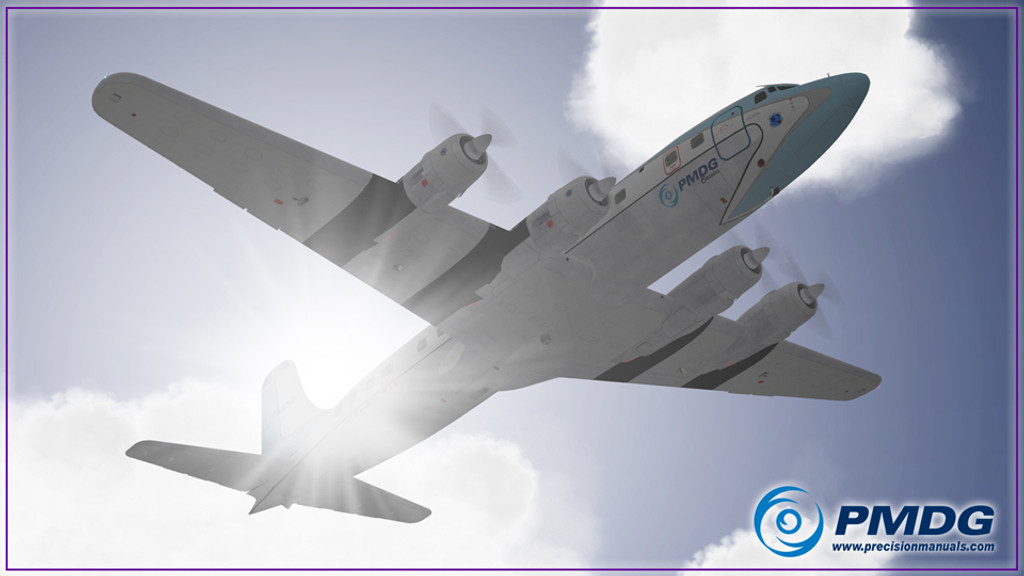 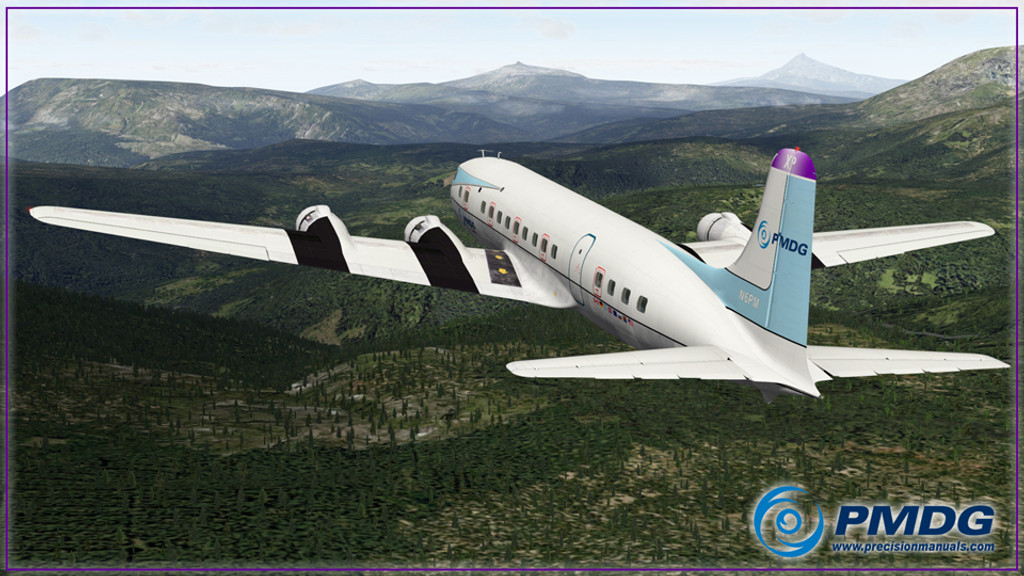 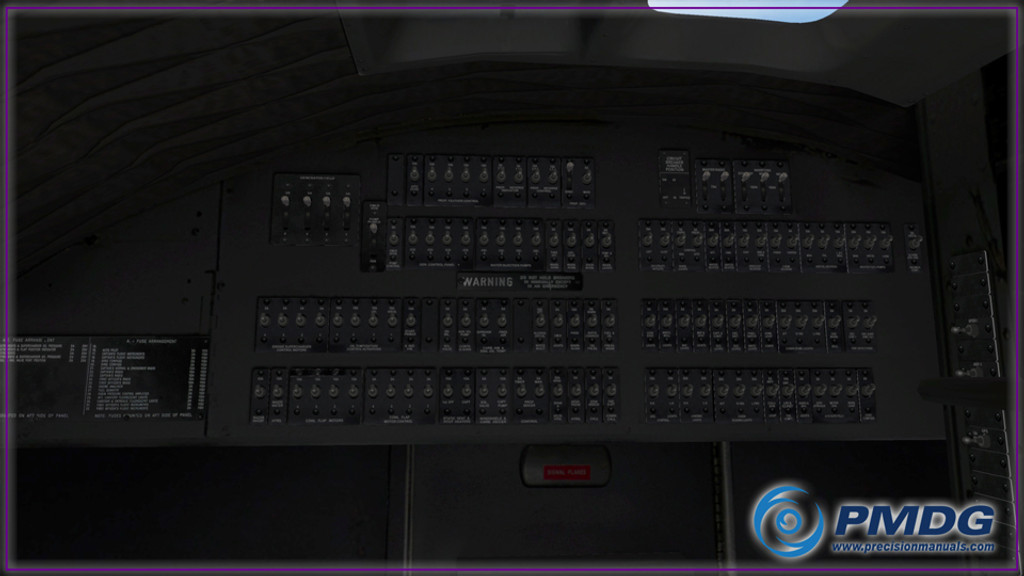 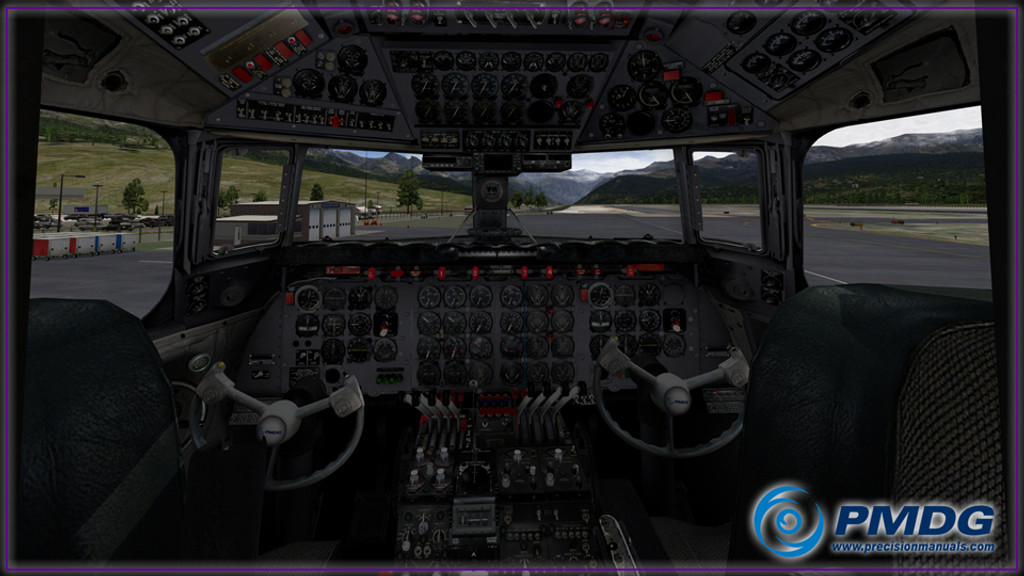 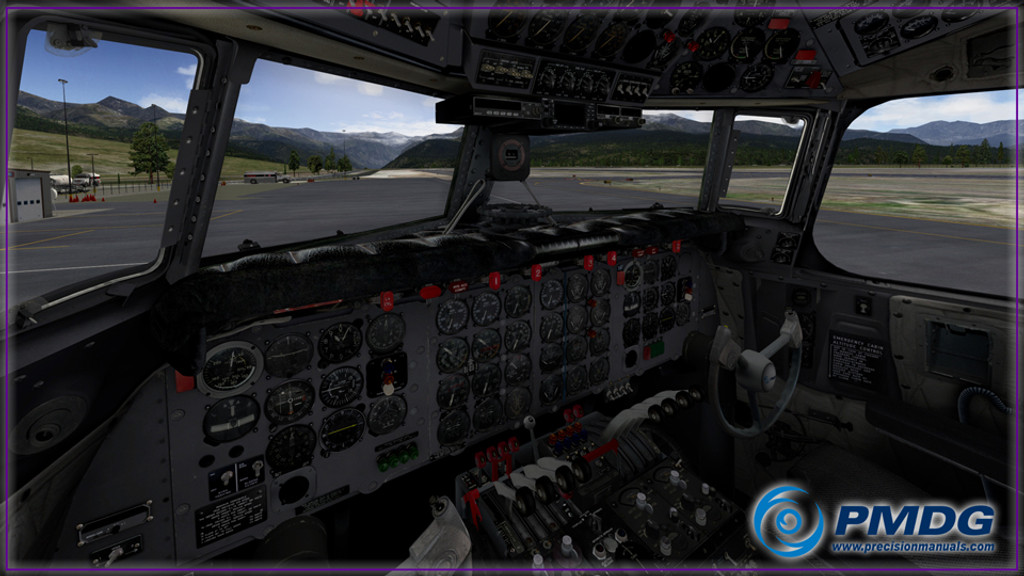 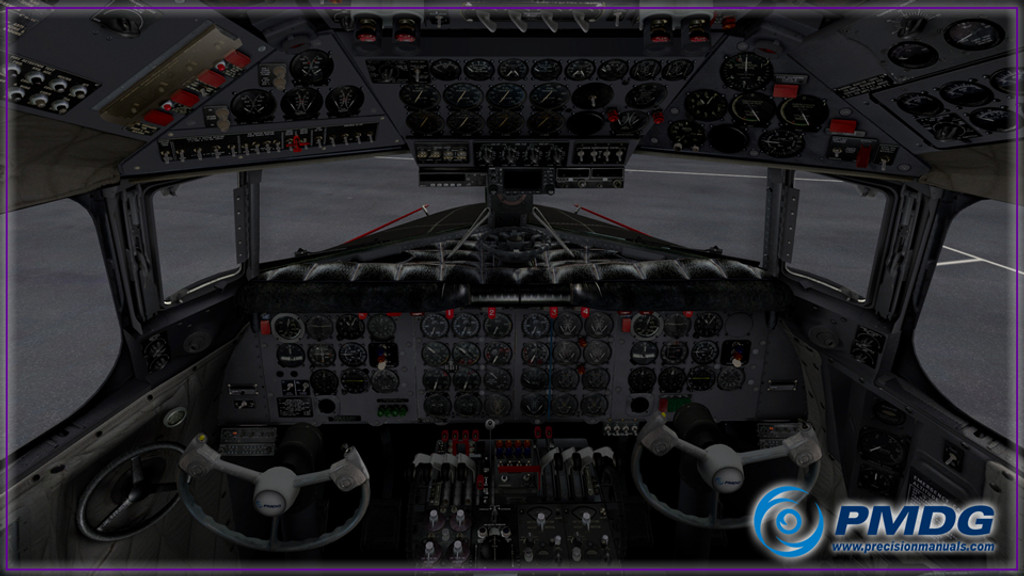 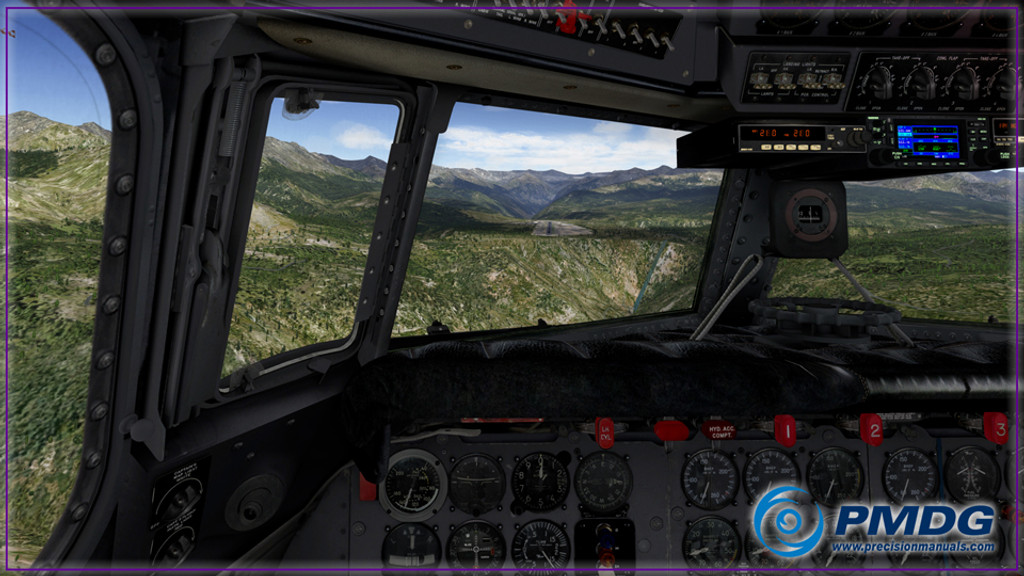 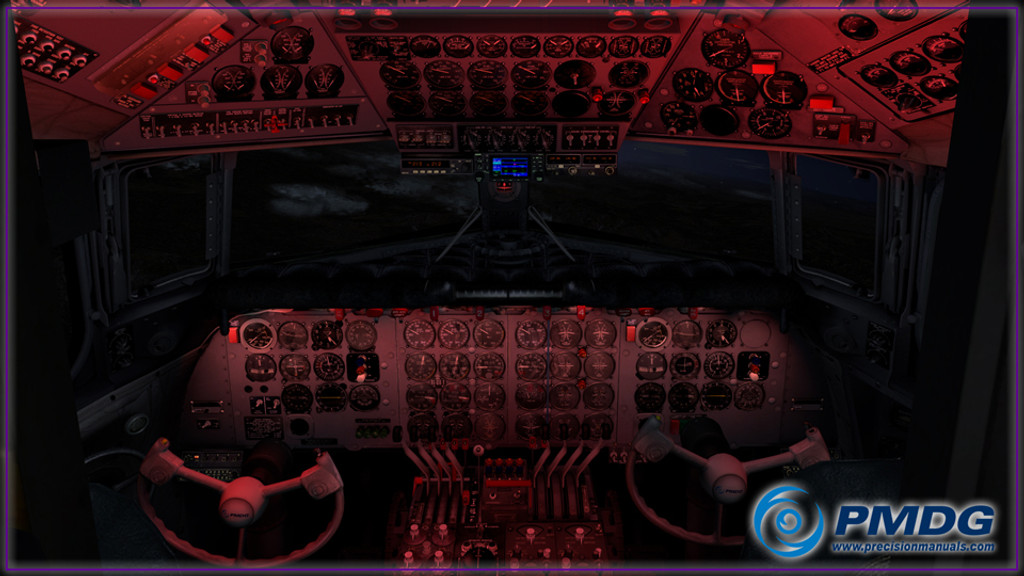 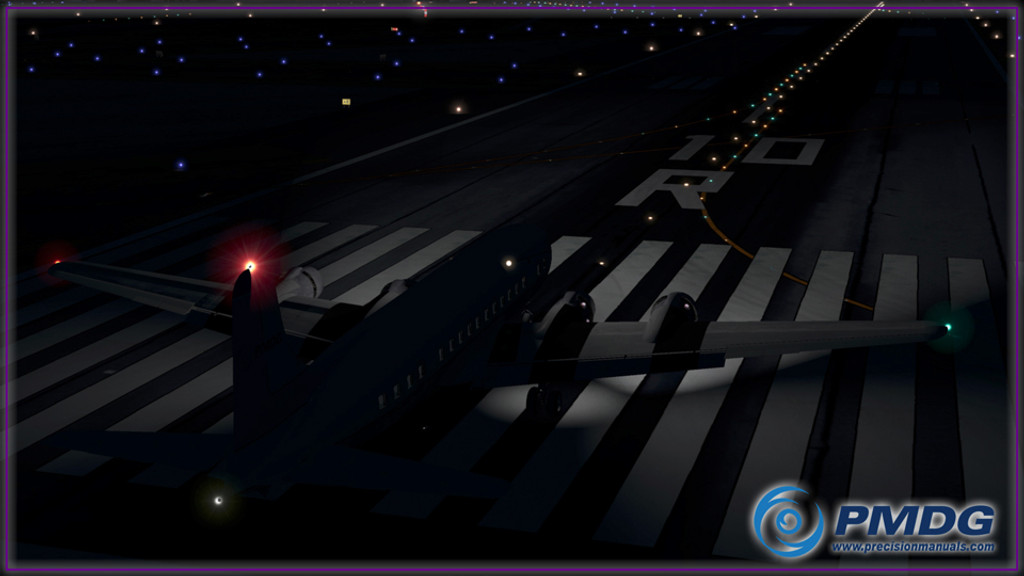 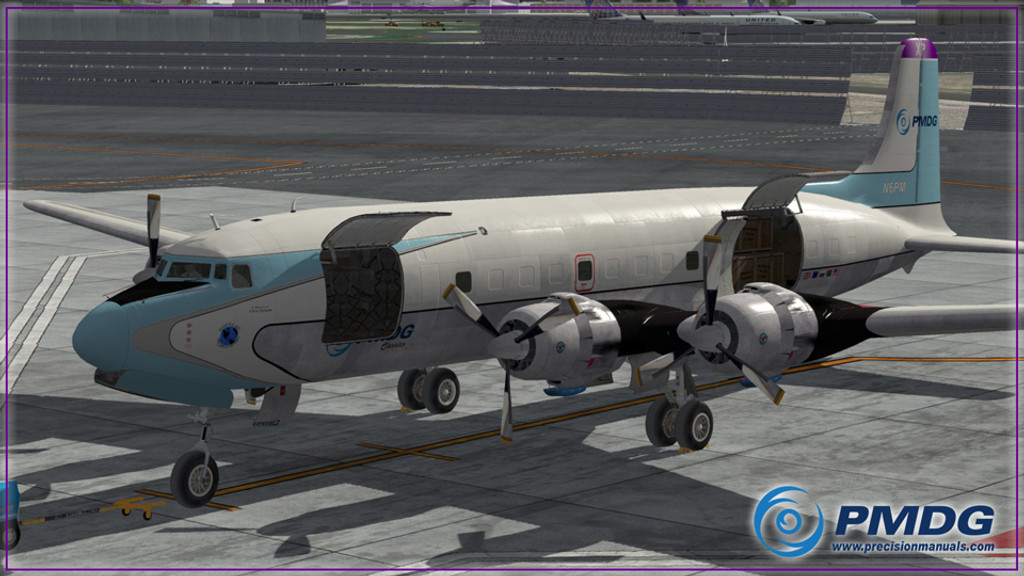 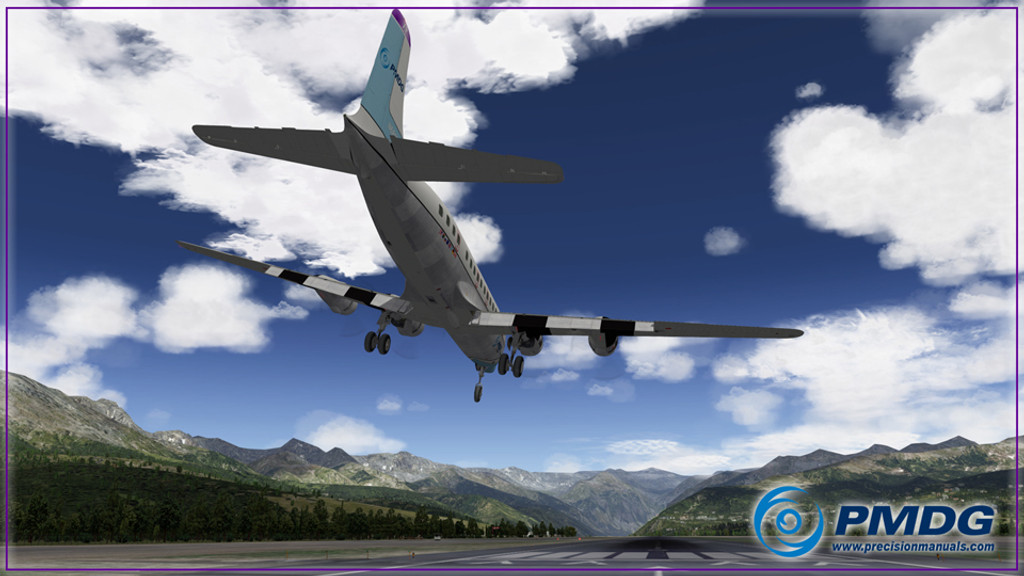 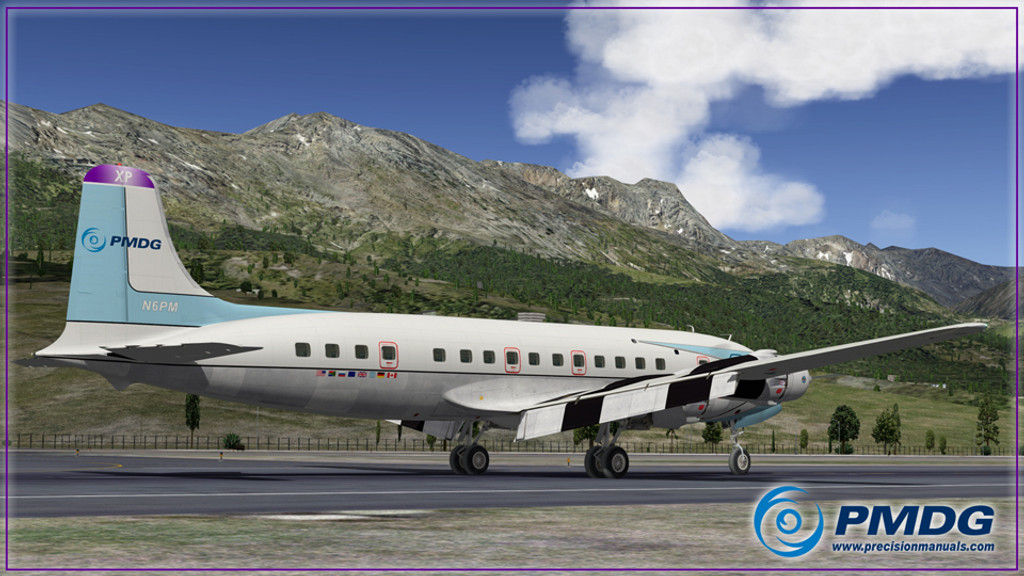 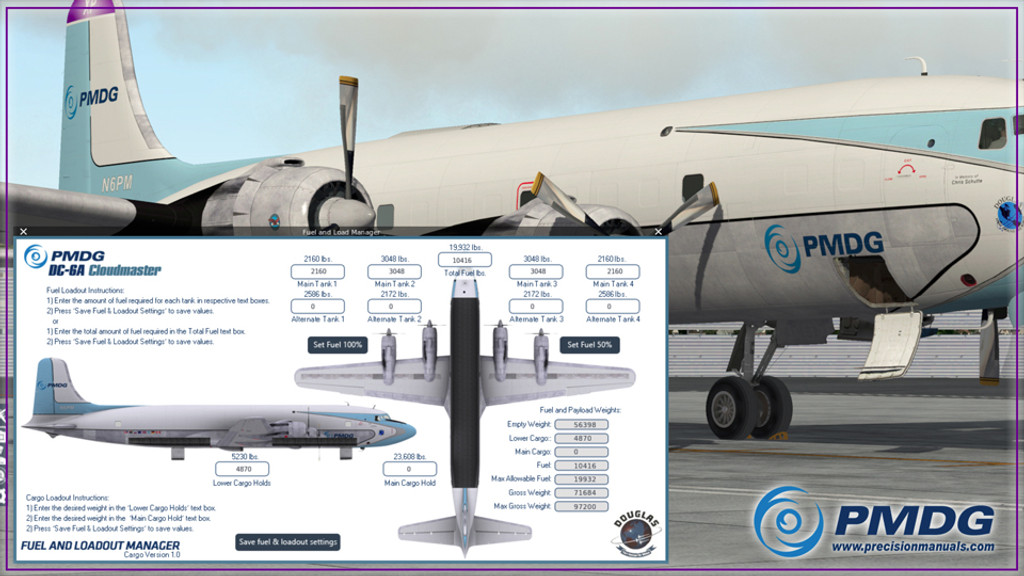 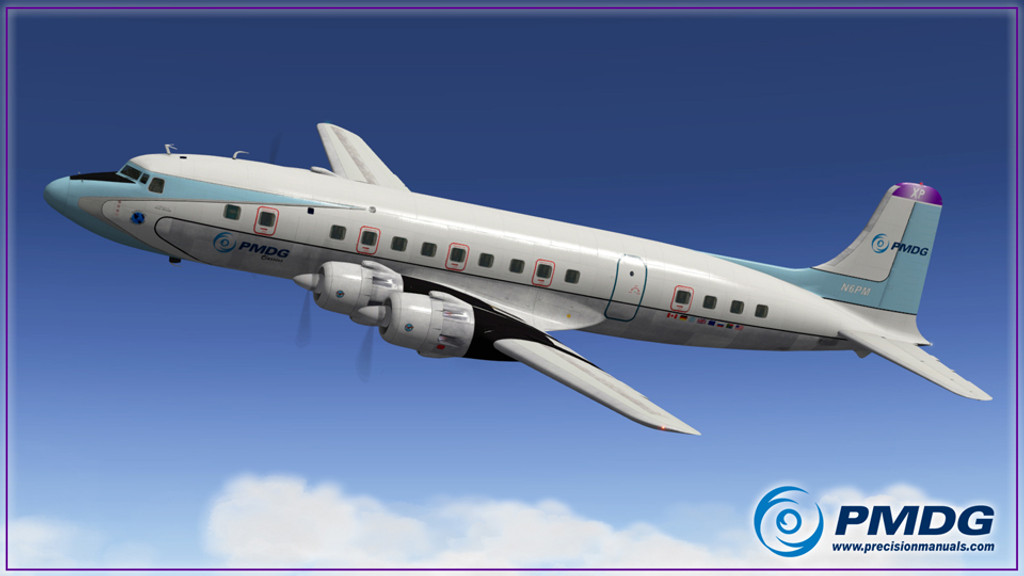 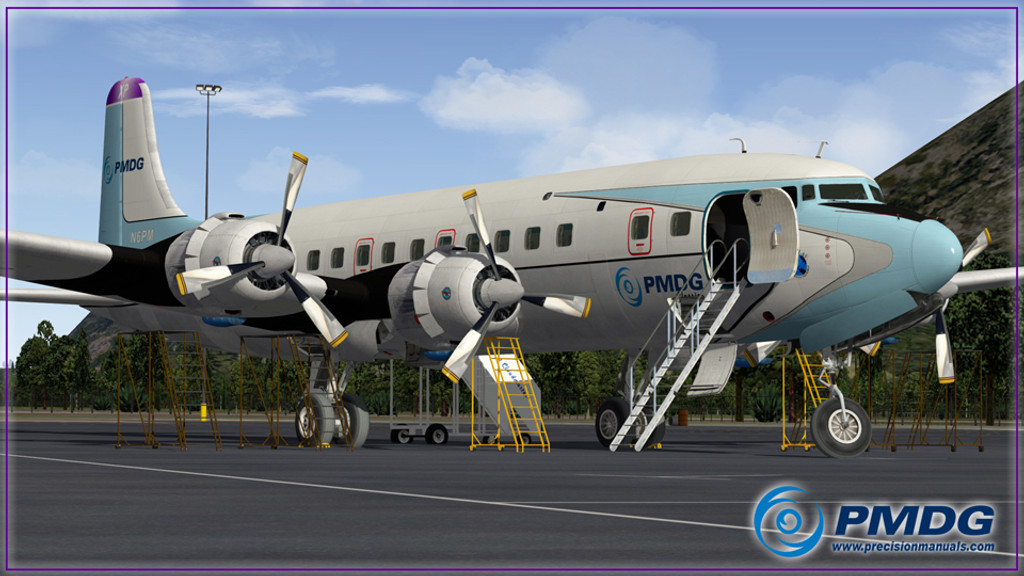 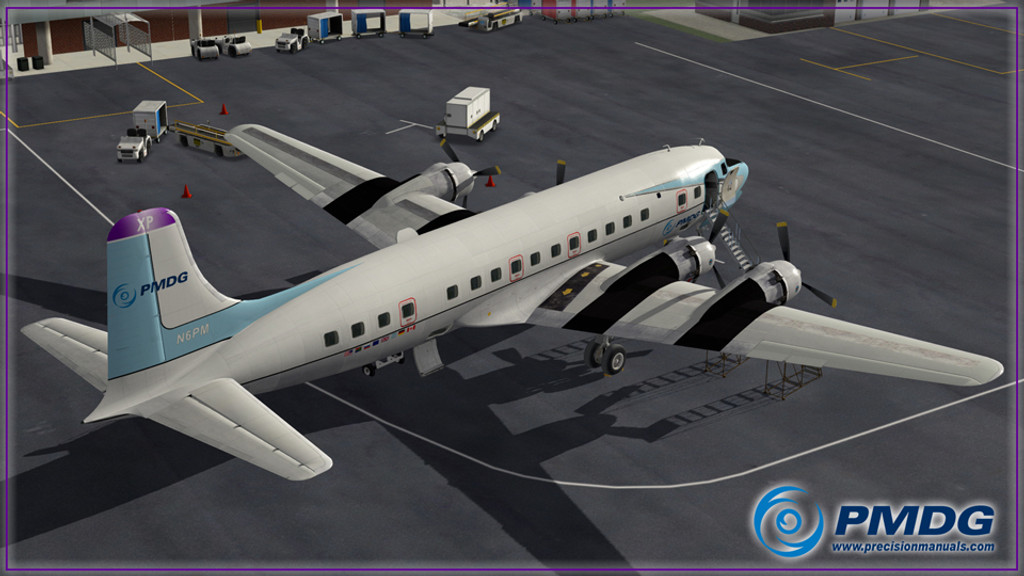 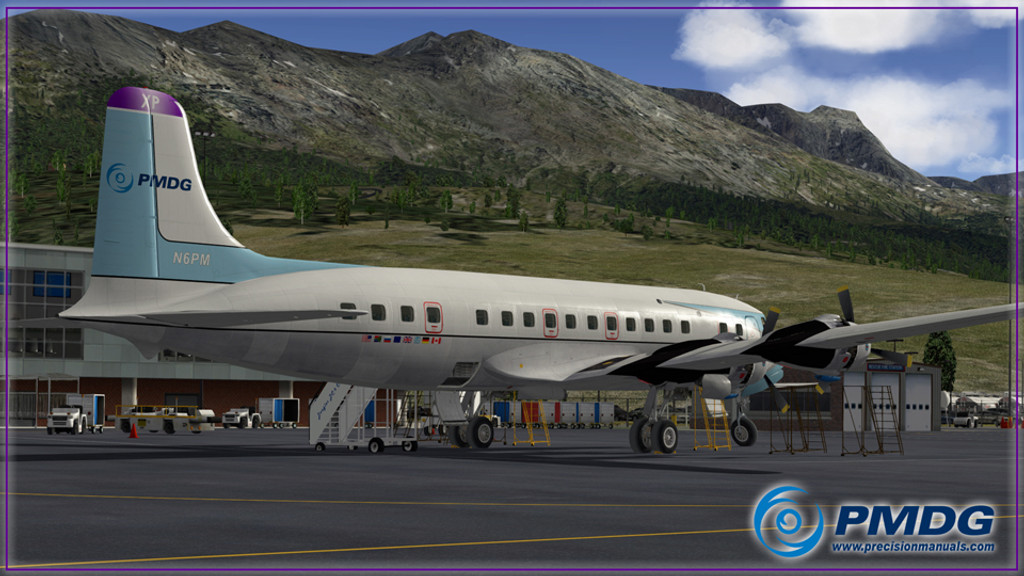 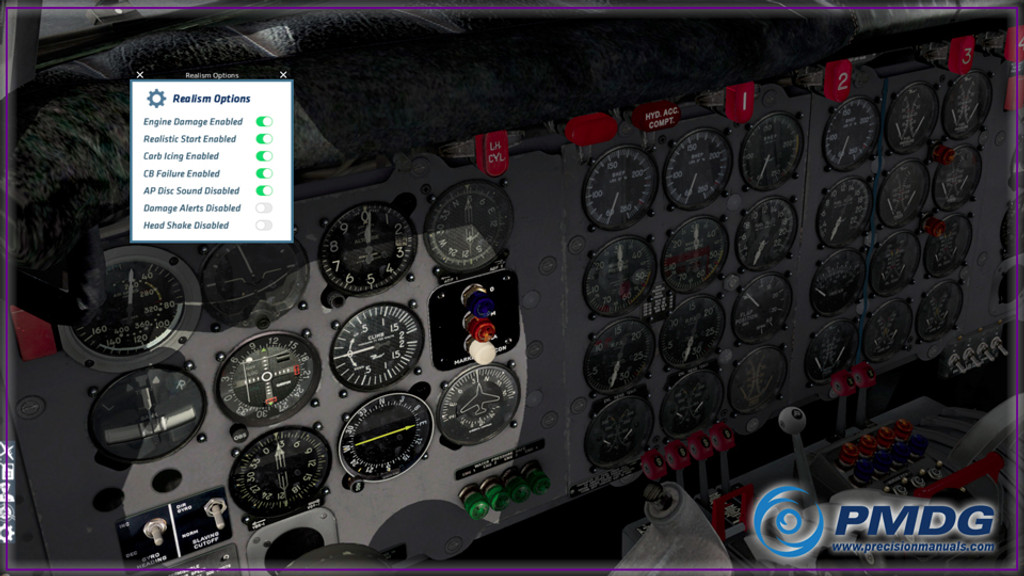 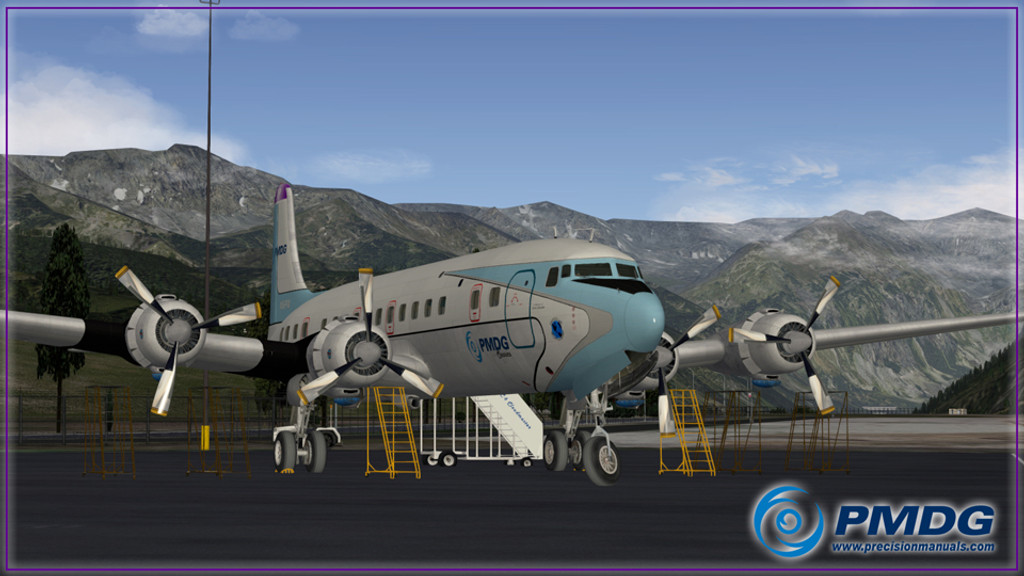 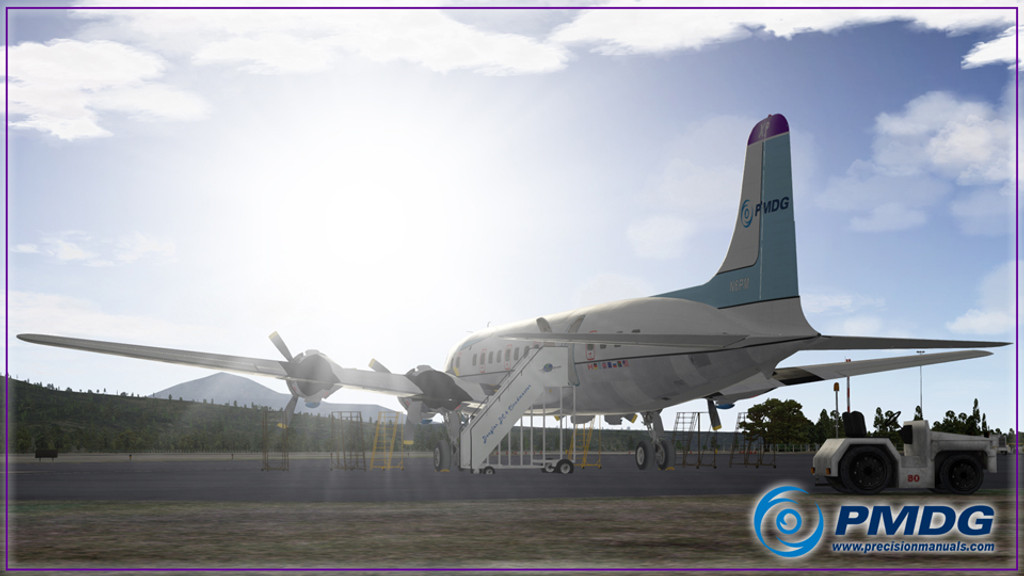 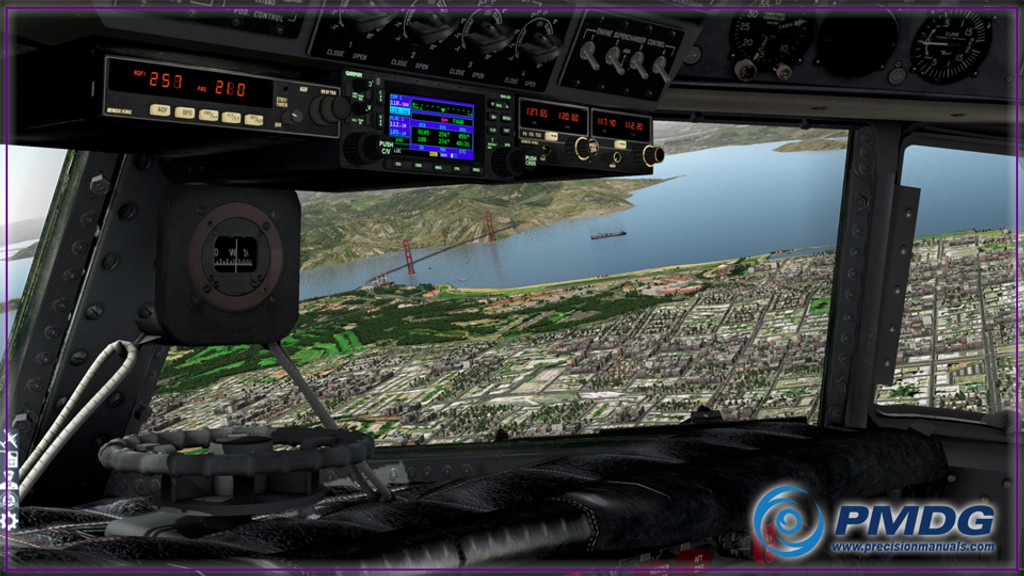 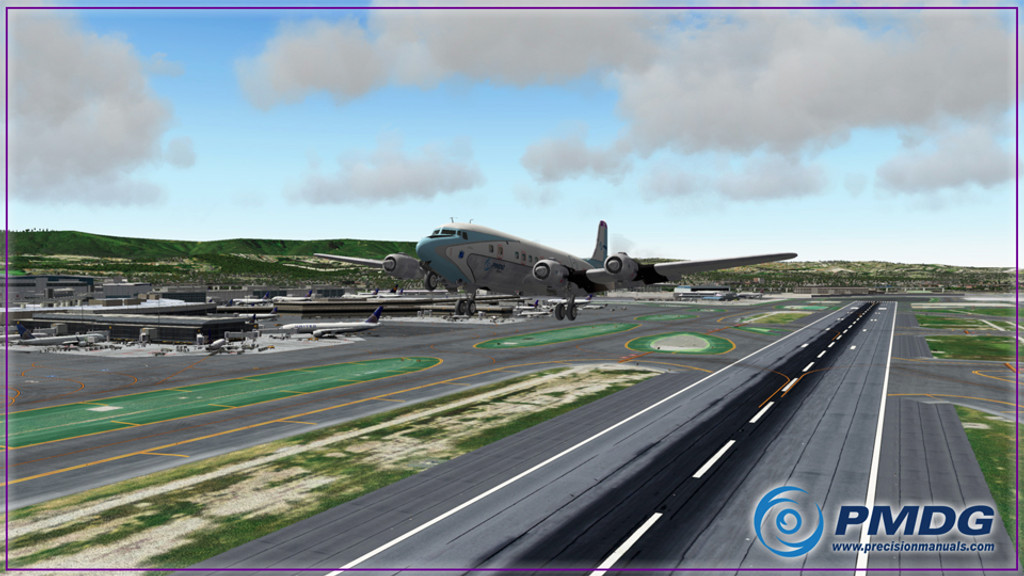 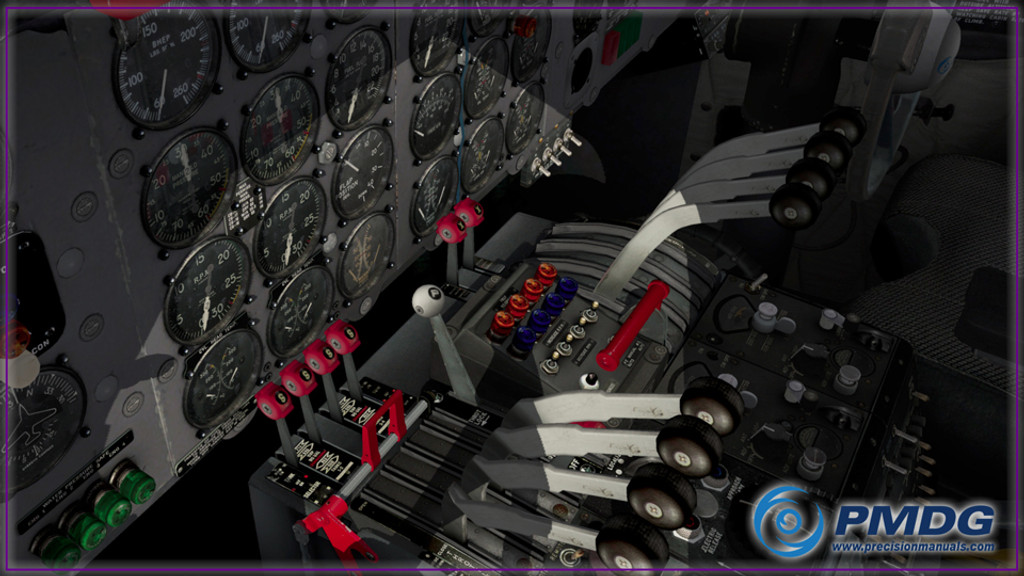 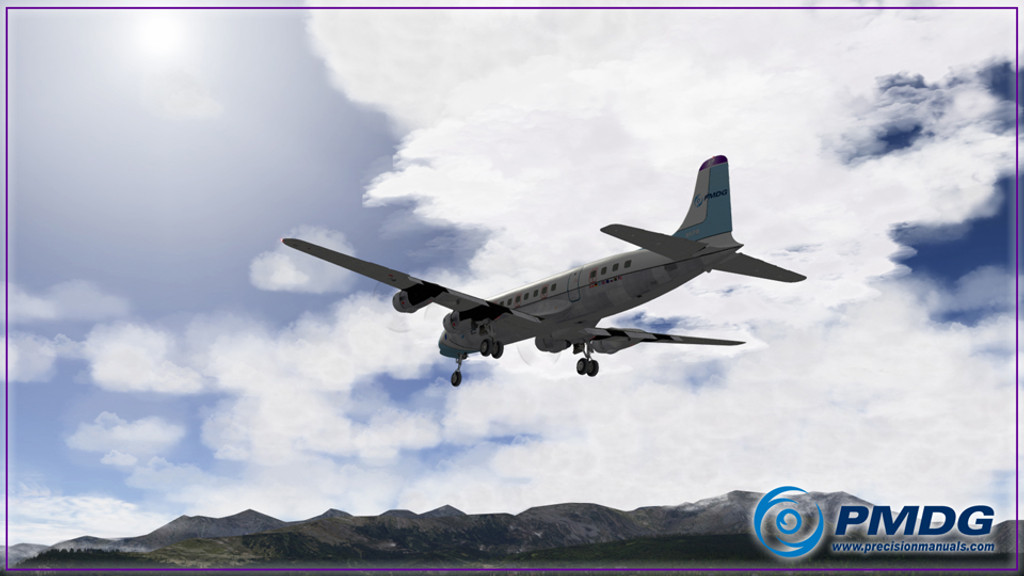 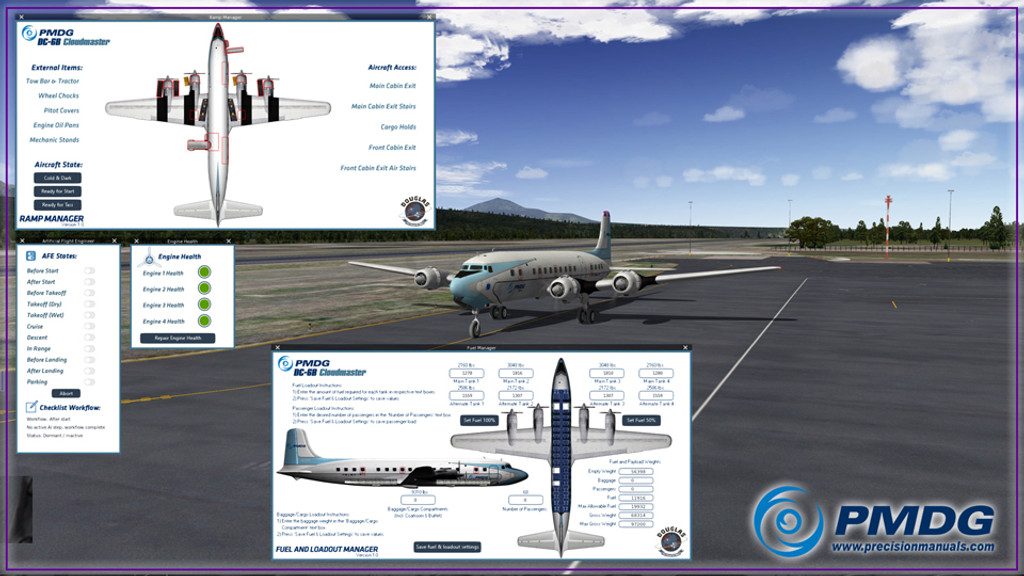 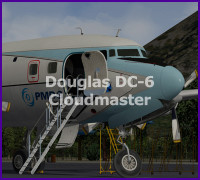 We invite you to relive the dashing days of Ernie Gann & Co. by flying this in-depth simulation of a true vintage airliner icon, the PMDG Douglas DC-6 Cloudmaster for X-Plane 10!

The DC-6 Cloudmaster, built by Douglas Aircraft Co., Inc. from 1946 to 1958, is a long range, low wing monoplane with full cantilever wing and empennage, semi-monocoque fuselage, and fully retractable tricycle landing gear. The "6" as it is affectionately known, features air conditioning and a completely pressurized cabin for high-altitude flight, and is designed for use as a passenger and cargo commercial transport. It is also suitable for operation both as a dayplane and a sleeper.

As with a number of other airplanes built during the 1940s, including the DC-3 and DC-4, the "6" was initially intended for military use. The DC-6 was called the C-118 Liftmaster in United States Air Force service, and the R6D in United States Navy service. It was used extensively after the war in a commercial role, and was Douglas's next step in their line of DC aircraft after the DC-4 Skymaster. Douglas's aim was for the "6" to compete with the Lockheed Constellation in the long-range transport market. Pan Am used the DC-6 as their airplane of choice to inaugurate its first trans-Atlantic tourist class flights, starting in 1952. There was a good reason Pan Am chose the DC-6, as it was considered to be the best in its class in the 1950's.

Power is supplied by four Pratt & Whitney Double Wasp, 18-cylinder, 2800-cubic-inch-displacement radial engines, with a gear ratio of 0.450:1. The engines are equipped with Hamilton Standard propellers and water/alcohol injection for higher take-off power.

The total production number of the DC-6 series was 702 including military versions, and this venerable workhorse still flies today in cargo, military, and wildfire control roles. The DC-6 was eventually replaced in airline passenger service by the Douglas DC-7, but the simpler, more economic engines in the DC-6 caused it to out-live the more sophisticated DC-7. DC-6s and 7s who survived into the jet age were eventually replaced in front line service by the Boeing 707 and the Douglas DC-8.

The DC-6 took to the air for the first time on February 15th, 1946. Thus, 2016 marks the 70th anniversary since the introduction of the DC-6. We feel it is therefore appropriate that we are releasing this simulation during the 70th anniversary year of this iconic airplane.

An accurate, detailed simulation of the DC-6 has been sorely missing from desktop flight simulation, until now!

After being in development for 2 years, PMDG's award winning development team is proud to release this faithfully reproduced aircraft. In traditional PMDG style, no effort was spared during this extensive development process and we are certain the DC-6 will quickly become your favorite classic propliner simulation!

PMDG DC-6 Base Package for Prepar3D